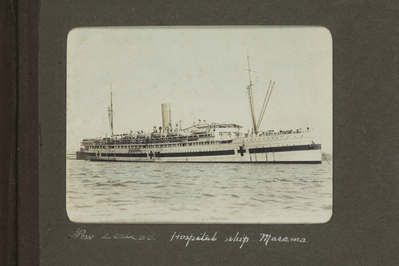 HMNZHS No. 2 (TSS Marama) was an ocean liner of the Union Steam Ship Company, and served as one of two New Zealand hospital ships during World War I. Digitised here is an album of black and white photographs, taken between 1915-1917, during Marama's operation as a hospital ship. Locations on the voyages include Melbourne, Cape Town, Marseille, Southampton, Suez, Colombo and Timaru.