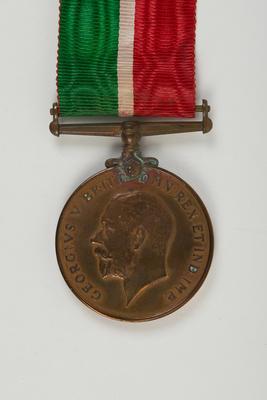 Description
Campaign medal awarded to George William Sutton for his service in the Merchant Navy during World War I. Attached to British War Medal on bar. The Mercantile Marine War Medal was instituted in 1919 and awarded to all members of the Merchant Navy who had undertaken one or more voyages through war or danger zones during World War I. Description: bronze circular medal, 36mm diameter, straight fixed suspension, with ribbon; obverse: bareheaded effigy of King George V facing left, with the legend: GEORGIVS V BRITT: OMN: REX ET IND: IMP: reverse: inside a circular band with laurel wreath, a steamship ploughing through heavy seas, submarine sinking on portside and sailing ship in the background; medal named in exurgue: FOR•WAR•SERVICE / MERCANTILE•MARINE / •1914–1918•
Ribbon: grosgrain, 32mm wide, green, white, then red bands of colour
Source: Spink: 145.