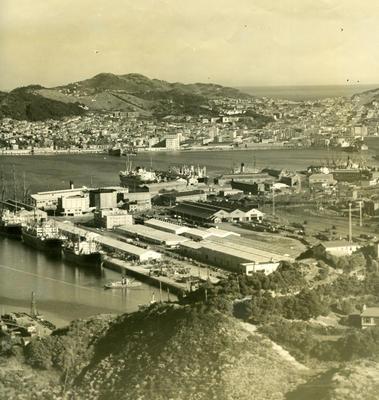 Description
An original black and white photograph of Aotea Quay and Lambton Harbour looking south. In the foreground are scrub covered hills with a floating dock (with a ship inside) and a small wharf in the lower left. In the middle is a large wharf area with buildings, vehicles and cargo. There are four ships alongside and a small ship approaching the wharf. Beyond are more wharves with three to four ships alongside. Beyond the wharves is an inner harbour with hills beyond. On the reverse is a stamp with the words "W Hall Raine, Photographer, 63 Willis St, Wellington, Phone 45-802". Wellington, 1930s-1950s.