Description
Colour photograph of a person, Tom Pearson aged 18 years old, tending to a cooking pot over primus stock set on a flat rock supported by smaller rocks on a ledge on a natural rock face, a jar of honey, can of food, opener and canister of food a loaf of bread and a enamel mug visible. a seal's head is visible on the mid left margin of the image.

Written annotation in faint blue ink pen on the verso, reads: "Tom in our kitchen reverse on TORU. He never felt the cold, you can see why".

Toru Island is in the Western chain of the Snares islands. This expedition took place between September 1995 to December 1995. 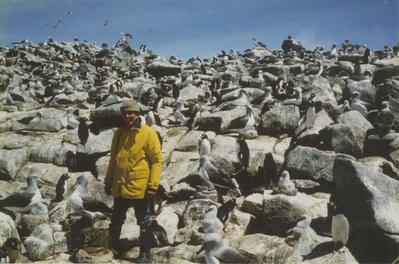