Description
Black and white photograph of RANGI (1905) sailing in a coastal harbour in New Zealand. RANGI was used for coastal timber log transport from forestry locations to mills.

This scow schooner vessel type was built by G. T. Nicol in 1905 in Auckland, for The Ford Shipping Company, and later for Messrs F. M. Winstone and Captain J. Francis. At the time this photograph was taken, it was owned by Leyland O'Brien Timber Company for their operations based at Freeman's Bay, Auckland.

RANGI (1905) has a schooner sail setting, as the mizzen mast is higher than the forward mast. Here the stays and rigging are visible.

Scows were primarily built for logging and the transport of firewood, sand and shingle on the coast New Zealand. 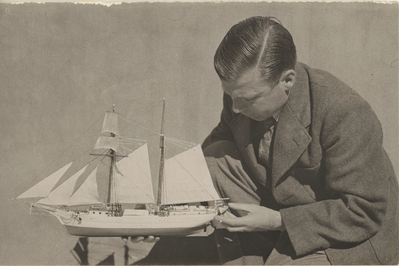