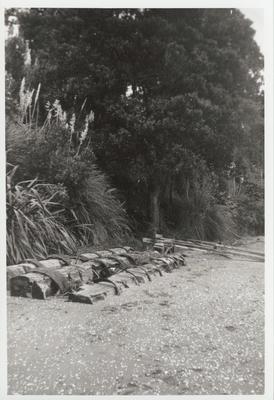 Description
Masts of coal-hulk EURE (1886) on Northcote Beach (west side of Northcote) early 1960's, from negatives taken by Jeremy Lowe. Formerly a French Naval gunship, decomissioned 8 Mar 1901 and towed to Auckland in 1913 to be used as a coal-hulk by the Northern Steam Ship Company.
Reverse of image reads "masts of hulk Eure at Northcote Beach" in faded pencil. Much more recent and legible pencil next to it reads 'Must of scow Eure at Northcote Beach'. Eure was not a scow and 'masts' is misspelled, so the second block of writing may be a misread transcription of the first.
From a series of twelve black and white prints of wrecks, images taken by Jeremy Lowe in the early 1960s.