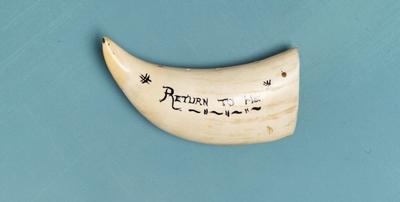 Description
Whale tooth decorated with the words "Return to me" in ink. 8 holes drilled into tooth at various points. John Elijah Hoffman worked as a whaler on a ship called WILLEM BARENTSZ (1955) in the Antarctic Ocean for four seasons from 1957-1961 (the shipping seasons lasted between 4-6 months). He collected the whale teeth as a hobby and to pass the time. The words "Return to Me" were dedicated to the artist's wife as a reference both to his promise to return to her and to a record [musical] of the same name he had given her.